In an earlier blog post I discussed the decision criteria in selecting a VM. In that post I also showed a tool called “VMchooser“. Today’s post will be on the architecture I used to build this one. As you might have guessed, it’s built on Azure components. Let’s get to it and check the anatomy of this application.

As mentioned, the webapp is used to serve the front-end ;

And as I’m a bit of a cheap-ass, I’ve deployed about 13 webapps on a single app service plan… Here I’m even using a “B1”-plan, which costs me about 28€ per month. 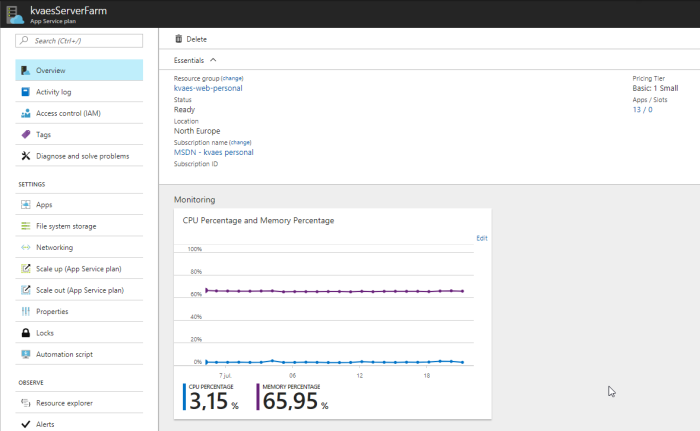 I’ve setup the Github integration. So I’m having continuous deployment when I push changes to Github ;

My code is public, but my secrets are not…

These I insert into the application as environment variables.

For the back-end, I leverage “Function Apps”, or “serverless” to use the market(ing) name for it ;

Next to that, just as with my web app, I’ve also setup Github integration ; 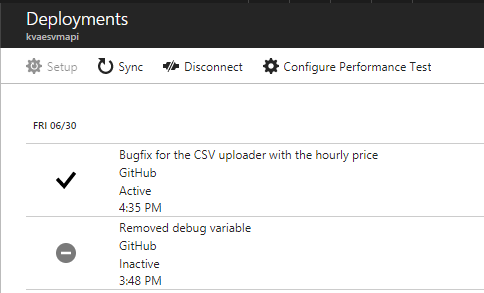 And also using environment variables for my secrets ;

Do note that I’ve increased the timeout, as my parser function sometimes needs a few minutes if you feed it a few thousand VMs. 😉

Here I can also monitor the runs of my function ;

For those who are new to functions… Click on test and open up the output log down below!

Now you can do live tests of your function and see what shows up in the log & output. I really love that part! And for the API management integration part, it’s best to also provide a Swagger (API) definition ;

So why did I pick functions?

The storage account serves as a base for the batch job handling. New upload are saved into the “input”. The ParseCsv function is then triggered by the presence of a new blob in this container. The output of the parser is stored into the “output” container. The webapp will check the existence of this file and return the location of that blob.

There is still room for optimizations in this area. Like, for instance, using SAS tokens for an enhanced security profile.

All code is published to Github. So you can roll your own “VMchooser” if you wish… 😉 Anyhow, all changes are immediately published to the webapp / functions. At this time, I’m even doing a direct query on the flat (csv) file that is stored on Github.

Possible optimizations here? If “VMchooser” grows popular (read: beyond my personal usage), I’ll have to upgrade to multiple environments to provide the needed stability during changes.

Thus also create several branches and link the production & non-production webapps to different branches. Though for now, that’s still overkill…  Next to that, having the csv file on another medium (like the storage account) would also make more sense then. Atm I’m sacrificing some performance with the current setup, though that’s still bearable at this time. The architecture provides me with the ability to just change the location by adjusting an environment variable.

(Disclaimer : Really… Do not test in production! Unless canary testing…)

The basic question of “what’s going on with my app”… That’s the gap which application insights fills in this architecture.

At the moment, I’ve limited the implementation to the basic integration. In the future I can still optimize by adding several checkpoints within my code and let that flow back to application insights.

As my back-end API is darn scalable, I also played with the idea of API management. Here I could allow third parties access to the same API via a subscription model.

At this time, that part isn’t used… Though it’s nice to know the option is already feasible. If at any point, there should be a necessity for it. 😉

After “optimizing” (read: removing api management due to no immediate need), the costs bears down to a few euro’s per month. Because in all honesty, the application plan (B1 @ 27€ / month) is used for A LOT. 🙂 Let’s say I would decouple the functions from that webapp. Then each CSV parsing of a 5″ jobs (several thousands of VMs) would cost me about ; 0.0042 euro cent per job for the parsing and at most 7 cent for all the API calls, if I’m being very pessimistic.

Tales from the crypt… euhr… field

For the CSV Parsing, I started off with a Logic App, that used a function as one of the steps. Here I learned there was a hard limit, being a 2 minute timeout on HTTP requests. As large jobs took longer than that, I switched to a functions only architecture. In reality that also had a great impact on the budget too… That set aside, I also needed to increase the timeout of my azure function to cope with the longer running jobs.

This architecture might be a “tad different” from what you are used too… I fully get that. Is this way a good plan for every application? Maybe not. 🙂 Though I hope it showed you that there is an alternative way in architecting your application(s). As you all probably know, I’m a huge fan of Azure and also the entire container & serverless spaces. The above was an example of a fully “serverless” architecture in Azure. Here I really love Azure Functions! And I highly recommend trying it out… This as I can claim it to be very good, though you’ll only truly believe me if you tried it out for yourself. Then you’ll notice the ease of setting things up & integrating it. But also the management features that come out of the box and reduce the development pain, euhr … annoyances, for you. 🙂