A first glance beyond the religion

When taking a look towards the landscape of databases, one can only accept that there has been a lot of commotion about “SQL vs NoSQL” in the last years. But what is it really about?

SQL, which stands for “Structured Query Language”, has been around since the seventies and is commonly used in relational databases. It consists of a data definition language to define the structure and a data manipulation language to alter the data within the structure. Therefore a RDBMS will have a defined structure and has been a common choice for the storage of information in new databases used for financial records, manufacturing and logistical information, personnel data, and other applications since the 1980s.

NoSQL, which stands for “Not only SQL”, departs from the standard relational model since it saw its first introduction in the nineties. The primary focus of these database was performance, or a given niche, and focus less consitency/transactions. These databases provide a mechanism for storage and retrieval of data that is modeled in means other than the tabular relations used in relational databases. Motivations for this approach include simplicity of design, horizontal scaling, and finer control over availability. The data structures used by NoSQL databases (e.g. key-value, graph, or document) differ from those used in relational databases, making some operations faster in NoSQL and others faster in relational databases. The particular suitability of a given NoSQL database depends on the problem it must solve.

So it depends on your need…

NoSQL comes in various flavors. The most common types of NoSQL databases (as portrayed by Wikipedia) ;

There have been various approaches to classify NoSQL databases, each with different categories and subcategories. Because of the variety of approaches and overlaps it is difficult to get and maintain an overview of non-relational databases. Nevertheless, a basic classification is based on data model. A few examples in each category are:

A column of a distributed data store is a NoSQL object of the lowest level in a keyspace. It is a tuple (a key-value pair) consisting of three elements:

A key-value (an associative array, map, symbol table,or dictionary) is an abstract data type composed of a collection of key/value pairs, such that each possible key appears just once in the collection.

A graph database is a database that uses graph structures for semantic queries with nodes, edges, and properties to represent and store data. A graph database is any storage system that provides index-free adjacency. This means that every element contains a direct pointer to its adjacent elements and no index lookups are necessary. General graph databases that can store any graph are distinct from specialized graph databases such as triplestores and network databases. 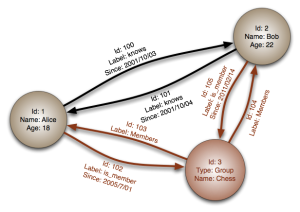 And what flavor do I want?

Each type and implementation has its own advantages… The following chart from Shankar Sahai provides a good overview ;

Also check out the research made by Altoros ;

5. Conclusion
As you can see, there is no perfect NoSQL database. Every database has its advantages and disadvantages that become more or less important depending on your preferences and the type of tasks.
For example, a database can demonstrate excellent performance, but once the amount of records exceeds a certain limit, the speed falls dramatically. It means that this particular solution can be good for moderate data loads and extremely fast computations, but it would not be suitable for jobs that require a lot of reads and writes. In addition, database performance also depends on the capacity of your hardware.

They did a very decent job in performance testing various implementations! 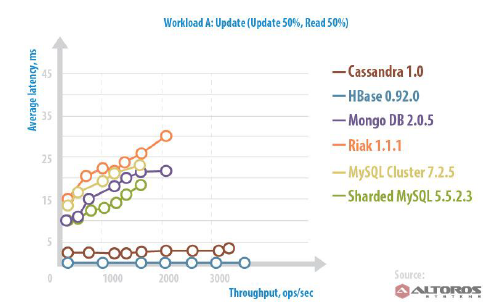 Check out OSnews’s article “NTFS: A File System with Integrity and Complexity“.

The topics handled in this article:

It showed me some interesting insights into the technical possibilities I wasn’t aware off. Nice examples are that “symlinks” is possible since Windows Vista and the concept of “streams!

There are a lot of nice technology names that sound cool, but where the actual specifics are a bit unclear. Hyperthreading is one of them for a lot of people. So check out the following arcticle “What Is Hyper-Threading?” @ makeuseof.com!

I’ve even spoken with one poor fellow who thought he’d purchased a eight-core processor because he saw eight graphs in Windows Task Manager. That’s what the sales rep told him, so when he went home and saw eight graphs, he was hooked. Seeing was believing. Two graphs appear in Windows for each core on a Hyper-Threading processor because Windows is detecting two logical processors for each core. The term “logical processor” sounds fancy, but a logical processor is by definition a processor that has no physical existence. Windows can send threads to each logical processor, but there is still just one core doing the actual execution, so a single core with Hyper-Threading is dramatically different from two seperate physical cores.

Listening to the sales talk
Sales persons in regards to IT software always say it’s easy to install & use. Yet from experience we know that this is correct if it’s done without straying from the path they had in mind. This being a “default default default” installlation without attempting to do anything “custom”. I use the term “custom” here very lightly, as mostly deviating from using a superuser will turn the application useless. Yet sadly enough, such a default installation is something that never occurs, unless you want to accept the given application as an “island” within your IT environment.

Integration & Maintenance are key!
The biggest downfalls of software is situated within Integration and on maintenance. If the integration part isn’t advertised during the sales round, then you can probably forget about that. To be clear; integration meaning when you want to use the data from a given application into another.

Good maintenance is a bulletproof installation which will last for ages! To be honest, I have yet to see an external party who thinks about the long term and therefor set up a system that’s rock solid and won’t budge even if an earthquake occurred. Most vendors think merely in regards to sales, where an unstable application provides them with billable hours (“consultancy” or support services).

Simply Put
As every management book tells you, think about our TCO. What’s that first character stand for? TOTAL… being the costs you’ll accumulate over the years. Looking short term will give your a big increase on maintenance which should not be treaded lightly. F*cked up installations are dreadfull to manage and will (Note: WILL, not might) give you disruptions in your availability. How much is such a downtime worth to you?

Check out the following article at gizmodo.com! It’s a nice rundown on how harddrives actually work.

I came across OpenFiler a while ago and was intriged by it. Now I’ve taken the liberty to testing it in my lab, and I must say that I’m impressed by the features. It’s something every sysadmin should check out to see if it isn’t a viable solution for their overpriced storage solution… 😉

Openfiler is a powerful, intuitive browser-based network storage software distribution. Openfiler delivers file-based Network Attached Storage and block-based Storage Area Networking in a single framework. Its uses the rPath Linux metadistribution and is distributed as a stand-alone Linux distribution. The entire software stack interfaces with third-party software that is all open source.

For those who liked the Mozy article, check out the following. Lifehacker featured an article comparing all the online storage services.

This week I was fed up with the recurring issues I have with my MythTV setup. We got used to the long channel changes and accepted that the remote control (actually LircD) acted up on a frequent basis. Yet after having had a lot of issues with my ATI card, I switched to nvidia. This week I did an upgrade to get Lirc more stable, which caused my video to lag… I suppose that some MythTV internal changed as updating/downgrading my nvidia drivers didn’t work.

As the WAF was completely ruined and each “downtime” caused my lifetime to shorten with a few years, I decided to go with my initial hunch to buy a dreambox. Two days later the box arrived and after a bit of googling I flashed the device with the PLI image and I was AMAZED!!! I repeat myself: AMAZED!!!

It’s a linux device underneath the hood, so I can simply manage connectivity to other devices. So it instantly became a small nas server for my other media devices too… Which brings me to another point; what will I do with my old MythTV hardware? 😉