In my previous post I talked about integrating Azure MySQL with a PHP webapp. Today we’ll elaborate on that one a bit further and see how we can setup CodeIgniter to use the Azure MySQL.

That’s it as preparation 😉

END_OF_DOCUMENT_TOKEN_TO_BE_REPLACED

When you deploy a MySQL in Azure, you should know that by default this enforces the usage of SSL on your connection.

And this is for due reason! You really do not want to create your database connection unencrypted. Though this is something that comes as something new to most PHP deployments, so let’s take a look at how to tackle this!

END_OF_DOCUMENT_TOKEN_TO_BE_REPLACED

Earlier this week I migrated “storage.kvaes.be” towards Azure. It was long due… Though I was determined to change the backend to Azure Table Storage. Are the better setups for this? Yes there are! Though I wanted to get myself a bit more familiar with the table storage from PHP. So I thought it was a nice test. 🙂 Anyhow, for the actual data migration I used a combination of manual mutations & data factory. I’ve already used the Azure Data Factory a few times before, and it always pleases me.

That brings me to today’s post, where I’ll do a quick run through how you can use Azure Data Factory for the migration of your MySQL database towards an Azure SQL Database (or any other support target).

END_OF_DOCUMENT_TOKEN_TO_BE_REPLACED

A while back I posted a blog post how to setup a High Available SQL cluster on Azure using SIOS Datakeeper. As I’m an avid believer of storage spaces, I was looking for a moment to test drive “storage spaces direct” on Azure. The blog post of today will cover that journey…

UPDATE (01/02/2017) ; At this point, there is no official support for this solution. So do not implement it for production at this point. As soon as this changes, I’ll update this post accordingly!

UPDATE (30/03/2017) ; A few days after the previous update, the following post was made => Deploying IaaS VM Guest Clusters in Microsoft Azure

What do we want to build today?

END_OF_DOCUMENT_TOKEN_TO_BE_REPLACED

This post is the first of a series in my journey to build a flexible / production ready MSSQL windows container. I thought this would have been a breeze with my experience on Docker for Linux, though I must admit running into multiple issues… This post will not provide you with a working container, as I’m still developing that one.

Once I deem it as production ready, it’ll be released to the community to be used freely. Though I want it to meet my personal quality standards, being that it should be stable and flexible enough to run in production mode.

For those who have been following me for a while (real life, twitter, yammer, linkedin, …); you probably know I’ve been preaching about MSSQL as a container for way too long. My personal vision was to have a MSSQL run in a container. The data should be located outside of the container, which would enable a (more/relative) easy path for the changes you want to implement.

So where volume mapping would be an option… I was also considering an integration with an external storage service. As an Azure fanatic, I (also) want to leverage the option of storing my data/temp files on Azure storage. This would provide my with total host independent storage persistence on Docker! For those who have been playing with Docker for a while, this is truly a powerful combination.

As a long term goal, I would like to see this running on a “serverless” platform. From what I have seen in the market, this is still an unreachable utopia/Walhalla at this point. So my current objective in that areas is to investigate the option of deploying this setup on a Service Fabric or to leverage the power of Rancher with Windows containers.

END_OF_DOCUMENT_TOKEN_TO_BE_REPLACED

Ever heard of Microsoft SQL Stretch Database? No… You should really check it out! Basically you can extend your OnPremise database towards Azure. By doing this, you can offload cold data whilst still being able to query it if needed.

END_OF_DOCUMENT_TOKEN_TO_BE_REPLACED

To measure is to know. If you can not measure it, you cannot improve it!

Today’s post will go more in-depth on what performance to expect from different SQL implementations in Azure. We’ll be focussing on two kind of benchmarks ; the storage subsystem and an industry benchmark for SQL. This so that we can compare the different scenario’s to each other in the most neutral way possible. 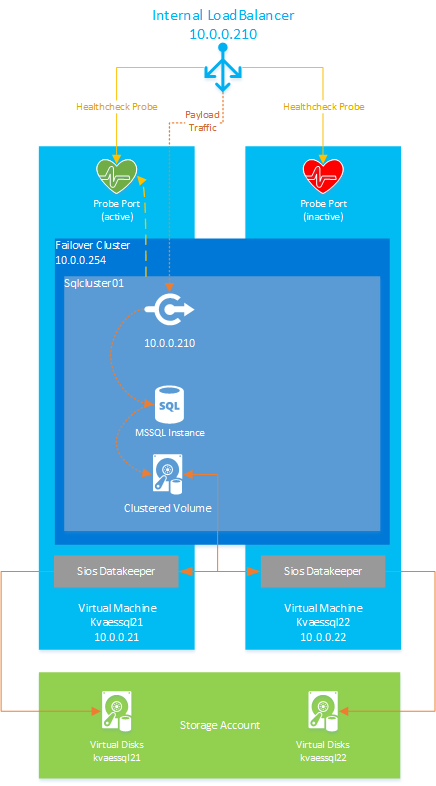 END_OF_DOCUMENT_TOKEN_TO_BE_REPLACED

It is important to know that you will only get an SLA (99,95%) with Azure when you have two machines deployed (within one availability set) that do the same thing. If this is not the case, then Microsoft will not guarantee anything. Why is that? Because during service windows, a machine can go down. Those service windows are quite broad in terms of time where you will not be able to negotiate or know the exact downtime.

That being said… Setting up your own high available SQL database is not that easy. There are several options, though it basically bears down to the following ;

Where I really like AlwaysOn, there are two downsides to that approach ;

So a lot of organisations were stranded in terms of SQL and moving to Azure. Though, thank god, a third party tool introduced itself ; SIOS Datakeeper ! Now we can build our traditional Failover Cluster on Azure.

Before we start, let’s delve into the design for our setup ;

END_OF_DOCUMENT_TOKEN_TO_BE_REPLACED

In the previous post I showed you how you can setup a backup to Azure storage and also mentioned that you can add your data/logfiles to Azure storage. An important note there is that this feature does not work with the storage account key, but you’ll need to set it up with SAS (Shared Access Signature) tokens.

END_OF_DOCUMENT_TOKEN_TO_BE_REPLACED

From SQL2014 (and upwards) you are able to integrate your Microsoft SQL Database with Azure Storage Accounts. You can do this for your backups, but also for your data files.

And to be honest, seting it up isn’t that hard!